THE FORMATION OF THE CLUB

The letter below records the formation of the 300,000 Miles Club by Frank E Fischer, our founder, to the Editor of Cycling magazine dated 28th February 1962.

From examination of the yearly mileage charts which were published early each year in the magazine, Frank was able to produce a list of 11 riders who had claimed total mileage exceeding 300,000 miles. He had looked at the individual claims and decided that they were all genuine and did not consist of any estimates.

There is an additional document entitled ‘Brief History of Fraternity of 300,000 milers’ which was written by Frank Fischer and dated August 1971.

This states that ‘As a result of Bert Houghton always quoting his life mileage when sending in his yearly chart to Cycling magazine, I noticed that his life mileage was always around 10,000 miles more than mine. After the mileage charts had been published in 1961 (with Houghton’s total now about 360,000) I wrote a letter *which was printed in ‘Cycling’ asking how many people had covered more than 300,000 miles and most important, kept an accurate record of their mileage (no guess-work estimates)’

I assume that the letter referred to at * was a precursor to the one dated 28 February 1962 bur there is no copy in the files. Perhaps someone who has kept ‘Cycling” magazines for this period might be able to help with this.

The ‘Brief History’ goes on to say that Frank anticipated about 40 replies to his letter but was disappointed to only receive ‘about ten’. Nevertheless there was general interest in forming a Club so he went ahead ‘with the proviso that there would be no subscription, no secretary, treasurer or president, and only one rule – each member must have covered at least 300,000 miles and kept a proper record of this’. He did acknowledge at the end of the document that he was ‘of course the unofficial secretary.’ Apart from this requirement it seems that the Club has indeed kept to these original tenets.

In the Club’s possession there is a hand written document; undated but probably written in 1962. This lists founder members which it states ‘Came early in 1962’ The missing name is a Wilcockson whose name is there, but crossed out. It gives his total in 1956 as 290,000 miles which may explain his omission, but then gives his total in 1957 as 302,500 with further pencilled in figures for the two subsequent years. Also recorded but later crossed out are the names J Walton (293,520 miles) and Mrs LF Chapman (289,065 in 1956 and 294,295 in 1957). Neither of these two riders figure in any future lists and it must be presumed that there was either a problem verifying their distances or they did not send in any further details.

Other names listed on this document but without any mileage details, are F Clark, E Wade, S Wild, HG Willmott and RE Cooke. A note states ‘These next five members came later, and by the end of 1963 we had 21 members’. The 1963 newsletter duly includes these five riders. It is understood that Frank Clark had met Frank Fischer ‘somewhere up the road’ and had verbal discussions regarding the formation of a Club prior to the original list of 28/2/62. The former was somewhat upset at not being included in the list of founder members. It can only be assumed that, although he was well qualified to be included, he had not submitted detailed documents to Frank Fischer in time.

Frank had by 1971 agreed to have an entry fee; 25 pence; to cover what were, and still are, quite small expenses. This fee has since lapsed as members generosity in the form of stamps or small donations has enabled the club to function without any additional funds. 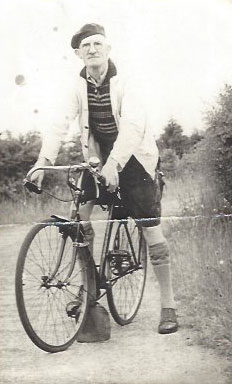 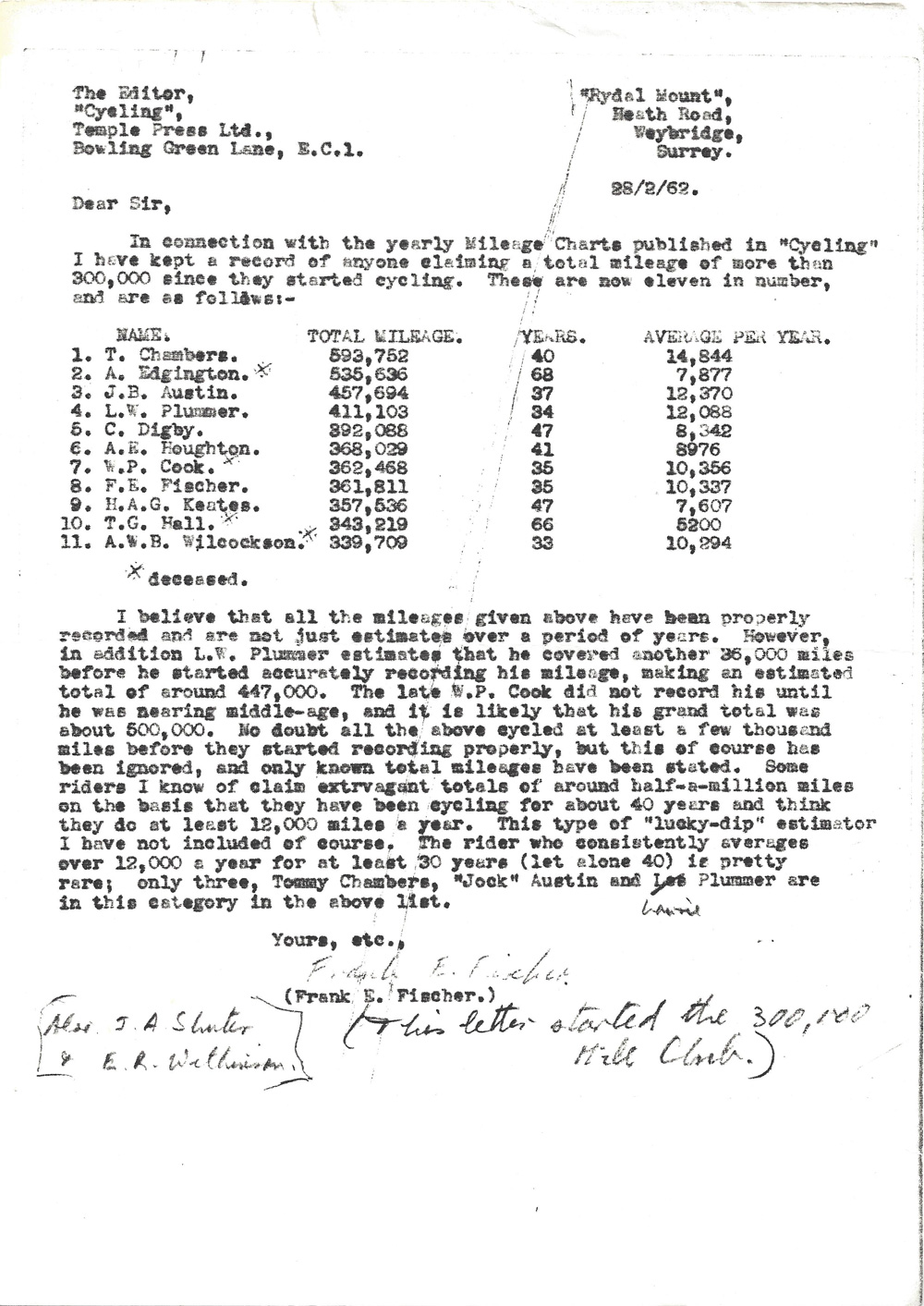 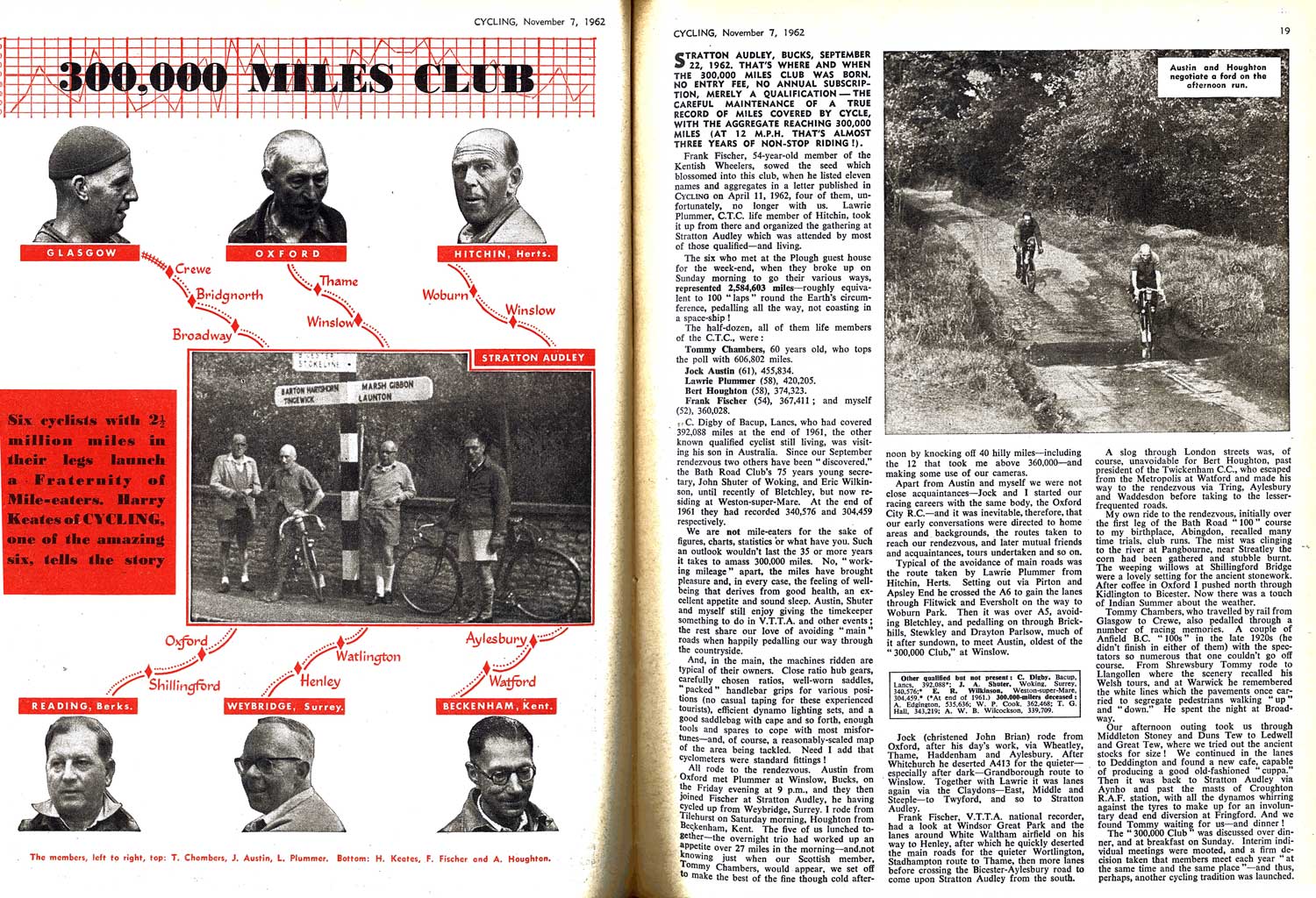